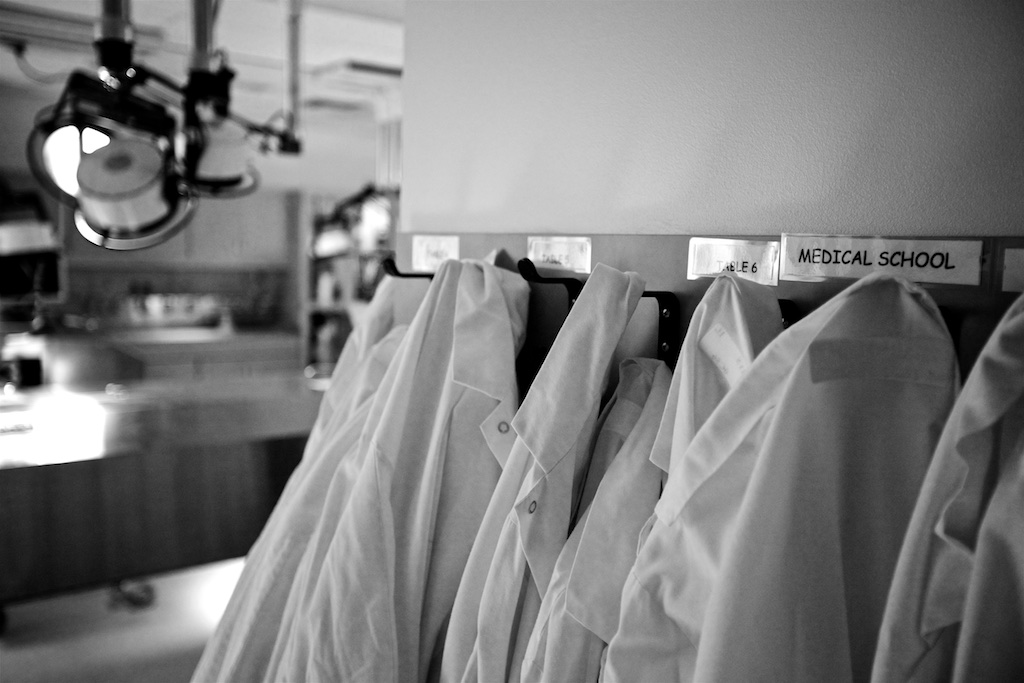 Learning The Difference Between The Person And The Body

Gross anatomy lab first year of medical school stands out in my memory of those four years. I don’t remember a lot of details about other classes or rotations, but I remember everything about Gross Lab. We all showed up for medical school fresh-faced, eager, scared, and proud. We knew we didn’t know much but wanted to pretend we did. We had survived undergrad and the harrowing application process and were actually going to be training to be doctors! The Premed years were filled with stress and uncertainty: is this the right path? What does it even mean to be a physician? Do I have what it takes? Can I handle the workload and schedule? Will I even get in? Now here we were and some of those questions were still unanswered.

There were four of us at each tank. We informally partnered with the four next to us and the eight of us formed a real bond: friends, future roommates, long-term connections. I am sure it was at least in part due to holding on to each other those first weeks in an environment which was radically different than anything we had ever known.

The Smell Stays With You

The lab started that first day, like every day, with bringing the cadavers up out of the preservative. There were these levers on the tanks. When you engaged them, the cover would open and this pale, waxy body would rise up on a metal table, liquid streaming down the sides and back into the tank. Very eerie. I will never forget the smell of preservative. And it stuck with you. After lab, some of us went across the street for lunch at the women’s dorm (UW Madison Liz Waters). People would get up and move away from us!

We were well coached on respecting the cadavers. These had been real people who had generously gifted their bodies for the advancement of medical science. They had relatives, loved ones, friends. In those days we weren’t told much about who they were in life. But we certainly wondered. We wanted some kind of permission or validation that what we were doing was valuable for something more than our own personal education. Would what we were doing really help our patients in the future? I would say yes.

It turns out, everyone is different. Surprise! A beautifully illustrated textbook with multicolored diagrams and labels looked nothing like the bodies we were starting to examine. Why is this nerve here and not there? I thought the heart was only supposed to be this big? What happened to the gallbladder? We once spent a whole morning carefully dissecting out the thymus gland only to have the professor come over, look at our final result, and throw it in the garbage stating it was just “silly fat.”

The Value Of Teamwork

We also learned the value of teamwork. What one student saw was different than another. Some had read more, some had better visual skills, some were better with the knife, some were better at getting us to consensus.  We learned to interact, trust, and come to agreement with much better results than any of us could have done alone.

The Real Difference: Person vs. Body

Most important is that we started to differentiate the person from the body. Right away we wondered “Is this still a person?” “Who was this person?” “Why is their body like this?” “What was their story?” In medical practice, there are times the body is in terrible shape, and there is not much we can do for it, but the person is whole and that relationship is rich. Sometimes the body is healthy but the mind has gone and the actual person is hard to find.  It is critical as physicians that we prioritize the person we have a relationship with and not just the body we are treating. It began that first day in Gross Anatomy Lab.